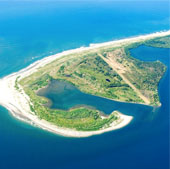 Jiquilisco Bay, a reserve and the most important coastal marine ecosystem of El Salvador. comprises 55 km of coast from the mouth of the Lempa River to the mouth of the Chepona in Jucuarán: contains 27 islands and islets and 22, 912 hectares of mangroves. On October 31, 2005 was declared a Ramsar site under the international convention on wetlands, because of its uniqueness and fragility, because it is the habitat of most coastal marine birds in the country. It is the only nesting site for some of them, and the
place of destination or step (feeding, moulting and resting) of eighty-seven migratory birds of international importance.

This site is home to a diversity of terrestrial species associated with water bodies and coastal areas. It should be noted that it has confirmed that four of the seven sea turtle species known worldwide visit Jiquilisco Bay for nesting. The species concerned are: the black turtle, Hawksbill, Olive Ridley turtle and tortoise Baule.

People living on the perimeter of the reserve is well aware of the need to preserve the site through the establishment of production systems compatible with the environment, co-management of protected areas, risk management and rescue skills TEK. The sustainable development of the area is based on tourism, harvesting of mangroves and coconuts, the cultivation of sugar cane, fishing and livestock.

For all that the Bay’s beauty and what it offers: its characteristics and unique landscapes, we invite you to visit this natural paradise of El Salvador.